Policymakers can use a broad range of instruments to enable DER deployment and ensure operation that contributes to desired goals. Policies typically take the form of targets for deployment, ‘direct incentives’ such as subsidies and tax credits, or enabling additional opportunities for DERs to create (and be rewarded for) value.

Regulatory decisions are made in the broader content of a policy and market environment. This context influences all other steps in the decision making process. The list below provide a brief overview of various policies and market instruments that may be considered for stimulating DPV-plus-storage system growth, many of which can also be considered for other DERs.

Storage deployment mandates: Governments can directly require utilities to procure specific levels of behind-the-meter storage capacity using deployment mandates. Most U.S. storage-related mandates to date have been stated in terms of total power capacity (kW) or energy capacity (kWh). Utilities may be subject to a single target or a series of consecutive, graduated targets over time.

Nonbinding storage goals: In addition to setting binding deployment mandates, jurisdictional authorities can also set aspirational or nonbinding goals for utilities to reach. Instead of including punitive measures to incentivize procurement, policymakers can attempt to remove barriers to deployment or provide additional funding. Some U.S. states have instituted nonbinding storage goals.

RPS and Clean Peak Standards: Renewable portfolio standards (RPS) are obligations regulators impose on utilities that require a certain level of energy used to meet demand or a certain level of generating capacity in a utility territory come from qualifying resources. Clean Peak Standards (CPS) are a relatively new variation on RPS and mandate that a certain portion of peak demand or net peak demand be met using renewable energy sources. These policies reflect a growing interest by policymakers and regulators to reduce the magnitude of peak demand and/or supply clean electricity to meet peak demand, as opposed to using conventional peaking capacity (e.g., open cycle gas turbines) that is typically expensive and less clean to operate.

Direct Financial Incentives: Policymakers can create financial incentives, which can help customers meet the upfront capital costs involved in purchasing DPV-plus-storage systems and improve their return on investment. Financial incentives are either direct (i.e., cash) or tax-based. Tax-based incentives can be production-based (i.e., tax credit for every kWh of renewable energy produced), investment-based (e.g., tax credit equal to a fixed percentage of eligible project costs), or tax exemptions (i.e., eliminate or reduce a specific tax). Tax credits reduce the overall lifetime cost of a DPV-plus-storage project by reducing the taxes that the owner of a project owes its government.

Distribution Network Service Provision: Utility DER-aggregation programs and pilots are typically intended to provide load control and demand response services to the local distribution system, as opposed to the wholesale market. In these more common use cases, distributed resources are either aggregated directly by the utility or by third parties, which then interface with the utility as a single resource to provide valuable services to the distribution system, such as congestion management. Similar to aggregated resources participating in wholesale energy markets, these resources must have the ability to receive and respond to signals, as well as relay their operational decision to respond back to the utility or third-party aggregator.

Adapted with permission from pages 51 - 59 of NREL: An Overview of Behind-the-meter solar-plus-storage regulatory design: approaches and case studies to inform international applications

Mandatory goals for DER help ensure that utilities have the opportunity to develop familiarity with the technologies as well as create investor confidence in the viability of the local market, which can stimulate long term economic growth.

As an example, in 2010 California required the California Public Utility Commission to establish energy storage system procurement targets for load-serving entities. These goals are unique for having a target for specific portions of the resources to be interconnected at the distribution level.

THE PEOPLE OF THE STATE OF CALIFORNIA DO ENACT AS FOLLOWS:

SECTION 1. The Legislature finds and declares all of the following:

(a) Expanding the use of energy storage systems can assist electrical corporations, electric service providers, community choice aggregators, and local publicly owned electric utilities in integrating increased amounts of renewable energy resources into the electrical transmission and distribution grid in a manner that minimizes emissions of greenhouse gases.

(b) Additional energy storage systems can optimize the use of the significant additional amounts of variable, intermittent, and off-peak electrical generation from wind and solar energy that will be entering the California power mix on an accelerated basis.

(e) Use of energy storage systems to provide the ancillary services otherwise provided by fossil-fueled generating facilities will reduce emissions of carbon dioxide and criteria pollutants.

(f) There are significant barriers to obtaining the benefits of energy storage systems, including inadequate evaluation of the use of energy storage to integrate renewable energy resources into the transmission and distribution grid through long-term electricity resource planning, lack of recognition of technological and marketplace advancements, and inadequate statutory and regulatory support.

Next, Look At This Table

In response to policymaker objectives, the public utility commission in California translated the desire for energy storage mandates into specific goals for each large utility in the state, and for each level of interconnection (transmission level, distribution grid-side, and distribution customer-side). In addition to these targets, the commission also established a level of flexibility for the utilities such that they could shift some of the portion between interconnection levels (e.g., they could meet some of the ‘distribution’ target with ‘transmission’ resources) and between years, though the 'customer' target could not be modified. This flexibility helped utilities meet targets while ensuring energy storage targets were ultimately met. 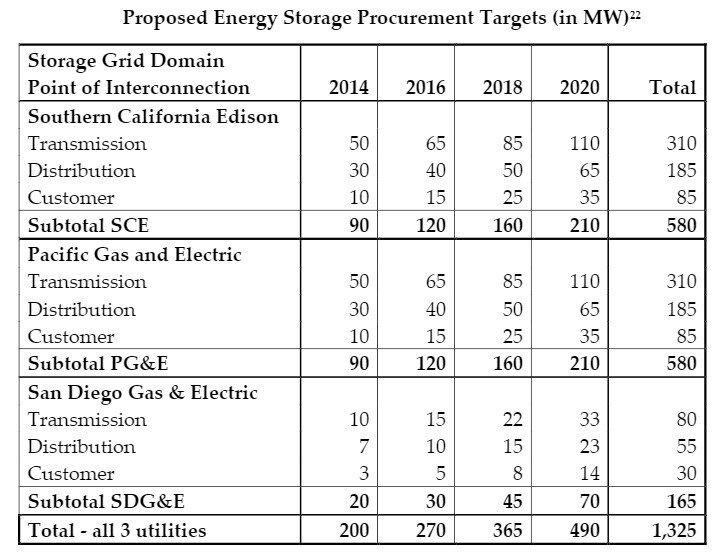 In 2015, India set a 175 GW target for national renewable energy capacity by 2022, including 100 GW of solar PV. Within this solar target, 40% is to come from distributed rooftop PV. This national target was broken down further into suggested individual state targets to accommodate differences in solar resources and power system context. 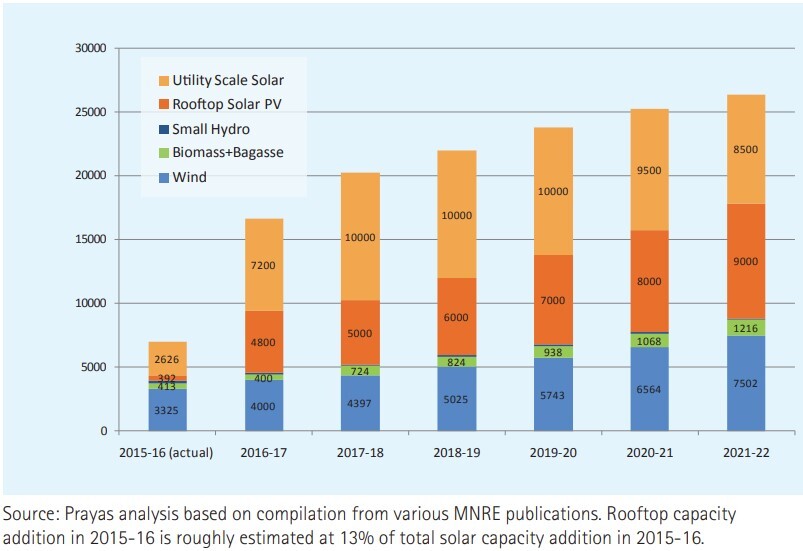 Choose the Regulatory Focus topic or go directly to the next main topic.

There are several regulatory tools and approaches that can be used when developing DER programs to ensure all stakeholders benefit from DER adoption and that overall costs are managed.