Why Focus on Distributed Energy Resources?

There are a variety of DER technologies that have the potential to provide a wide range of benefits to power system stakeholders. As a result, use of DERs is growing around the world, particularly DPV and behind-the-meter (BTM) storage.

However, because their use represents a shift from traditional power system operation, new policy and regulatory frameworks are needed to successfully integrate them into power systems. Appropriate policy frameworks can encourage the use of DERs, contribute to system reliability and resilience, and ensure that the benefits of DERs are shared between all power system stakeholders.

What You Need to Know

This video from the Australian Renewable Energy Agency provides a general overview of DERs and how they might influence power systems in the near future. Watch Excerpt: What are Distributed Energy Resources (DER)? by ARENA.

There are several definitions of DERs, but it’s possible to define their key characteristics, as described by the National Association of Regulatory Utility Commissioners (NARUC) in the United States.

A DER is a resource sited close to customers that can provide all or some of their immediate electric and power needs and can also be used by the system to either reduce demand (such as energy efficiency) or provide supply to satisfy the energy, capacity, or ancillary service needs of the distribution grid. The resources, if providing electricity or thermal energy, are small in scale, connected to the distribution system, and close to load. Examples of different types of DER include solar photovoltaic (PV), wind, combined heat and power (CHP), energy storage, demand response (DR), electric vehicles (EVs), microgrids, and energy efficiency (EE).

DER growth is being driven by favorable policies, reduced costs, and consumer benefits, but planning for significant levels of DERs is important.

DERs are being adopted at ever-increasing rates due to favorable policies,…improvements in technology, and reduction in costs, as well as becoming more widely accepted with identifiable customer benefits, both at the individual level and, possibly, for the grid. However, once DER adoption passes certain levels, DERs can begin to cause significant issues for traditional rate making, utility models, and the delivery of electricity.... Importantly, having a plan in advance of that determination will facilitate the ability of a jurisdiction to be proactive in planning for and responding to increased levels of DER in concert with the increase.

DPV, in particular, is growing rapidly today because of its low cost, especially in locations with favorable policy environments. A particular advantage of DPV is the ability to use rooftop space, thereby avoiding land use issues.

Propelled by strong policy support concentrated mostly in Europe, the United States and Japan, distributed solar PV deployment has been growing exponentially. Rapid investment cost reductions of 60-80% since 2010 have raised the economic attractiveness of solar PV, facilitating the adoption of residential and commercial applications. Furthermore, the levelised cost of energy (LCOE) of distributed solar PV is lower than variable retail electricity prices in many countries where electricity prices are not subsidised. In 2018, distributed PV additions accounted for 40% of total PV growth worldwide and exceeded the net capacity additions of coal and nuclear combined.

Ongoing policy incentives and cost reductions in the next five years are expected to further improve the distributed PV business case, expanding its adoption by residential and commercial consumers. Global distributed solar PV capacity, including off-grid applications, is expected to almost triple – even reaching over 600 GW by 2024 in the accelerated case [the accelerated case assumes rapid consumer adoption under favourable economic, policy and regulatory conditions]. In fact, of all renewable technologies, residential and commercial PV applications demonstrate the most potential for additional expansion in the accelerated case....

Even in the accelerated case forecast, however, global installed capacity in 2024 represents only 6% of technical potential based on available rooftop area. Increasingly affordable and economically attractive distributed PV systems for hundreds of millions (or even billions) of private investors could therefore lead to a distributed PV expansion boom in upcoming decades.

And See This Figure

There has been rapid growth of commercial/industrial and residential DPV around the world. The falling cost of storage technologies, combined with policy support, has driven the growth of behind-the meter (BTM) storage, which offers the advantages of leveling demand and offering services to the grid. BTM storage is an example of a 'customer-side' DER, discussed in more detail in the next section, What's Different About Customer-Side DERs?

Self-consumption and BTM storage: the combination of distributed solar PV and BTM storage can create economic value by increasing self-consumption or delivering services to the grid (ancillary services if PV is coupled with storage). Adding storage raises investment costs considerably, however, so additional revenue is required to recover the investment. Additional revenue can be gained by increasing the share of self-consumption or by using energy arbitrage to shift the sale of electricity to the grid to times when electricity prices are higher (peak hours). Government incentives may also help to recover part of the additional investment. The success of these measures depends on tariff design and time-based electricity pricing (time-of-use, peak and off-peak). In addition, the aggregation of multiple BTM storage units could provide ancillary services to generate additional revenue. Government subsidies have been the main driver for BTM storage in recent years, while costs have dropped by almost half since 2016.

There have been significant growth and cost declines in BTM storage.

Traditional low-cost DERs like energy efficiency and demand response programs will remain important, but as future DER technologies like automated load control become more prevalent, investment in advanced metering infrastructure may be required to take advantage of them. (Note that further discussion of pure demand-side DERs is beyond the current scope of the Clean Power Hub, but may be covered in the future.)

Electricity systems with high demand growth and clean energy goals may want to consider accelerating the development of demand response programs specifically tailored to providing additional reliability in the short to medium term, and the ability to help integrate variable generation in the medium to long term. To that end, modern, verifiable forms of emergency demand response from large commercial and industrial customers may be a natural place to start. Residential critical peak pricing programs can also be effective, and they do not require much communication infrastructure. Static ToU [Time of Use] tariffs...are likely to become even less effective as additional variable generation makes net load curves less predictable and more correlated with weather rather than schedules.

Instead, in preparation for deeper forms of demand response on the residential side, utilities and regulators may want to consider which types of appliances and other loads might be able to provide useful services in the future, and what the most effective means of tapping into those resources might be. Advanced metering might be desirable if real-time pricing plus automatic controllers are anticipated, or if the responses of third-party aggregators are to be verified through official meter readings. If other forms of control or verification are anticipated, for instance, direct load control of select appliances plus verification based on a sample of participants, or automatic control of programmable communicating thermostats, widespread investments in advanced meters may be unnecessary. 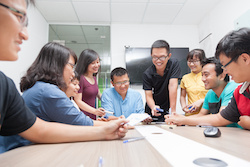 What DERs can help you achieve your policy objectives?Ask your questions and share your experiences in the Clean Power Hub Community

DERs interconnected on the 'customer-side' of a meter can provide services to both the customer as well as the broader power system. These rapidly growing 'customer-side' DERs offer the widest range of services, helping meet the needs of the customer, the distribution system, and the transmission system. Tapping into all of these potential services, however, may also require a significant shift in how the power system is operated, as well as well-designed policy and regulatory frameworks.